Here is an excellent post by Vance Christie that will stretch your faith.  Check out his web site at www.VanceChristie.com In carrying out Christian ministry and in our other circumstances of life, God has a way of leading us to exercise faith in Him. He does so to keep us dependent on Him, to strengthen our faith in Him and to increase our appreciation of Him. George Muller was reminded of these truths time and again throughout his years of faith-filled ministry. Muller’s example encourages us to similarly trust God in our own faith-stretching situations of life.

For the first two years after establishing his orphan ministry in Bristol, England, Muller was blessed with a steady stream of God’s provision for the ministry. But then during the summer of 1838 Muller’s faith was put to the test when donations for his three orphan houses seemed suddenly to dry up.

One evening he was walking in his garden meditating on Hebrews 13:8: “Jesus Christ the same yesterday, and today, and forever.” Presently the pressing need of the orphan houses came to his mind, and he was promptly led to say to himself: “Jesus in His love and power has hitherto supplied me with what I have needed for the orphans, and in the same unchangeable love and power He will provide what I may need for the future.”  A sense of joy flowed into his soul.

Barely one minute later a letter was brought to him.  It contained a gift of twenty pounds (equaling 100 dollars, a goodly amount in 1838). The Lord’s timing was evident, confirming both the teaching of His Word and the claiming of that truth in faith by His servant. By that September 18 all available funds for Muller’s orphan houses were again exhausted.  He and his staff had been praying earnestly about the pressing need but received no apparent answer.  Consideration was even being given to selling some household items deemed not absolutely essential in order to provide the next day’s food.

The middle of that afternoon a lady called at Muller’s home.  She explained that she had come from London to Bristol four or five days earlier and had been staying right next door to the boys’ orphan house that entire time.  She then presented Muller with a contribution to his ministry from her daughter in London.

Muller later wrote:  “That the money had been so near the orphan houses for several days without being given, is a plain proof that it was from the beginning in the heart of God to help us. But because He delights in the prayers of His children, He had allowed us to pray so long; also to try our faith, and to make the answer so much the sweeter.”

The following spring one of the orphanage’s annual reports came into the hands of a man in Devon who immediately perceived the ministry’s need for ongoing financial assistance.   The man had a Christian sister of means, and he began praying that she would be led by God to donate some of her valuable jewelry for the support of the orphans.

Not long thereafter Muller received from the woman a gift of a heavy gold chain, a ring set with ten diamonds, a pair of gold bracelets and a cash donation of two pounds.  Before parting with the costly diamond ring, Muller used it to neatly etch the words “Jehovah Jireh” (“the Lord will provide,” Genesis 22:14) on a pane of glass in his room.  Many times afterwards his heart was cheered when he caught sight of the words on the glass and remembered this particular instance of the Lord’s remarkable provision.
Posted by David Warren Fisher at Thursday, October 27, 2022 No comments:

Don't Stop Praying...the Blessing Will Be There 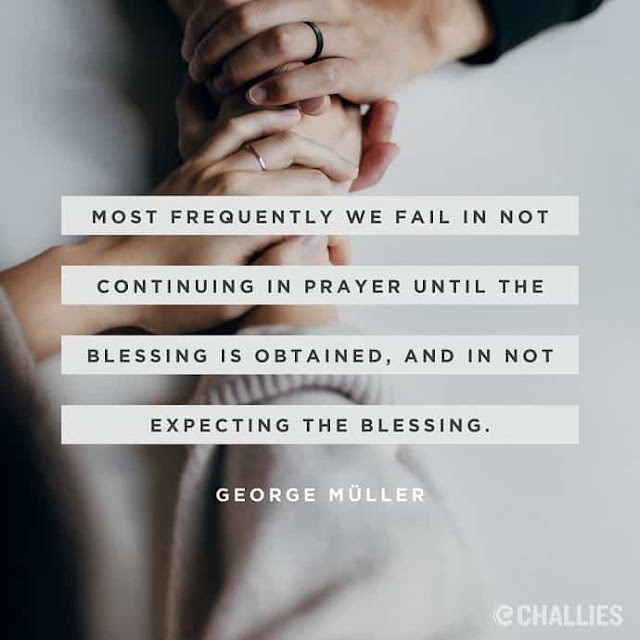 Be persistent in your prayer...
and the blessing will be there.
Posted by David Warren Fisher at Monday, October 04, 2021 No comments:

Where Does Faith Begin?

“George Mueller has been a pacesetter for me in prayer. His Autobiography is an orchard of faith-building fruit. In one section he tells us, after forty years of trials, ‘how to be constantly happy in God.’ He said, ‘I saw more clearly than ever that the first great and primary business to which I ought to attend every day was to have my soul happy in the Lord.’ ” Piper then relates how that for ten years Mueller would go to prayer first thing in the morning, but often suffered from wandering thoughts for up to half an hour.

Mueller himself describes a significant change he then made in his personal devotions routine and the benefits that yielded: “I began to meditate on the New Testament, from the beginning, early in the morning … searching into every verse for the sake of obtaining food for my own soul. The result I have found almost invariably this, that after a very few minutes my soul has been led to confession, thanksgiving or supplication. So that though I did not, as it were, give myself to prayer, but to meditation, yet it turned almost immediately more or less into prayer.”

Comments Piper: “I have found Mueller’s way absolutely crucial in my own life: be with the Lord before I am with anyone else and let Him speak to me first.”

Piper shares a number of other personal encouragements he has received from historic Christian biography in his book Brothers, We Are Not Professionals (Broadman and Holman, 2002), chapter 13, “Brothers, Read Christian Biography” (pgs. 89-96).

Posted by David Warren Fisher at Friday, February 12, 2021 No comments:

Be Assured - He Will NEVER Fail You

Wise words from a man who trusted God implicitly.  God will NEVER fail you even though we so often fail Him.  THANK YOU, Father! 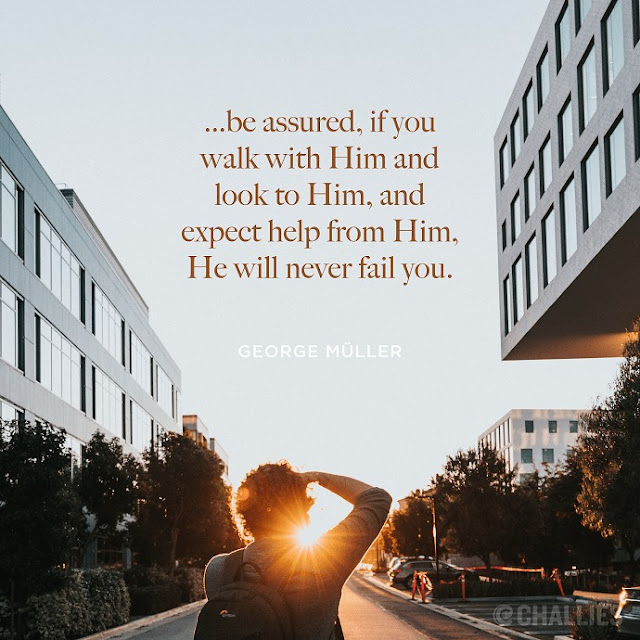 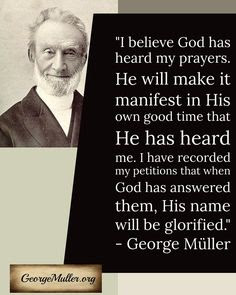 Vance Christie posted an excellent article on George Muller on his web site.

Check it out here! 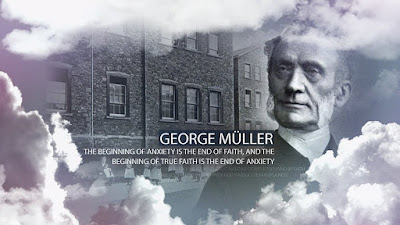 During these unprecedented times with the horrific COVID-19 pandemic, I've had the opportunity while STAYING HOME to watch a lot of YouTube videos.

Today I watched the George Muller Documentary - A Cloud of Witnesses and I was encouraged and reminded that God still provides today...just as He did in Muller's day.

PLEASE take the time to enjoy the story of a man who trusted God alone and was never disappointed.

God bless you and keep you safe! 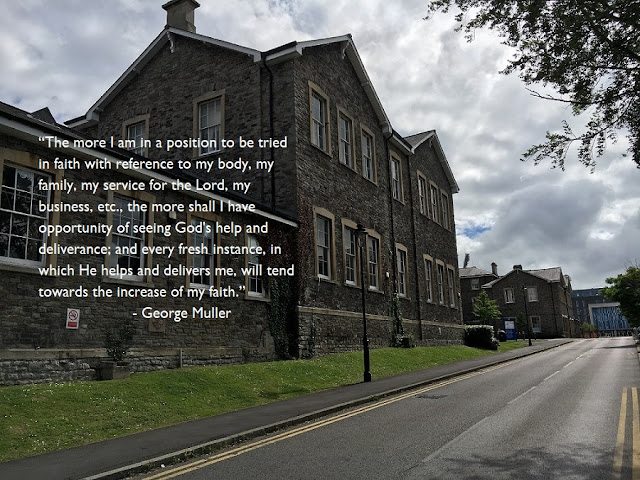 "The trials of our faith will increase our faith and yield eternal rewards."
Posted by David Warren Fisher at Saturday, September 28, 2019 No comments: 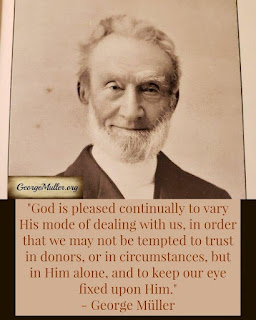 Very exciting news from Bristol, England regarding the opening of the George Muller museum in the original house 2 of Muller's orphanage.

Please click on this link for news about the George Muller museum opening!


Posted by David Warren Fisher at Sunday, September 08, 2019 No comments: 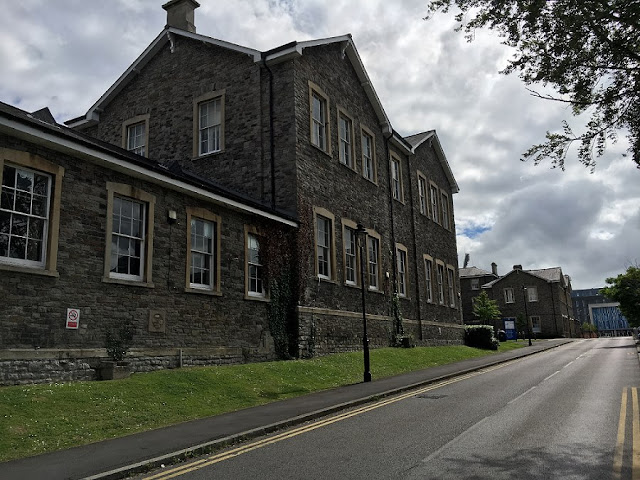 
We are settling into our new office which is located in the
second Orphan Home George Müller built in the 1800s to
house 400 children.
Our new address is:

45 - 47 Loft House,
College Road,
Bristol,
BS7 9FG
We are redirecting post from our old address but
please do update your records. Our office hours
are Monday to Friday 10 am - 4 pm.
We have retained our telephone number,
0117 924 5001.
Please note our museum remains closed throughout July
and August. We are working to open our new space for
The George Müller Museum in September.
For more information on George Muller, the orphanages
he founded and the Muller museum, please click here.

David trusted Jesus Christ as Savior when he was 6 years old. In 1975 God called him to an encouragement ministry to pro athletes through letter-writing, Epistle Sports Ministries. David served with Baseball Chapel as chaplain to the Toronto Blue Jays for 29 seasons. Married to Carol, they have 7 grown children. David's wife Carol founded the Kawartha Komets hockey club for special needs kids and adults. They live in Peterborough, ON. David is an avid reader and book collector. He is a pianist and songwriter and enjoys Southern Gospel music. David also enjoys writing. His favorite preachers are Joseph Stowell & John Piper. Favorites from the past include Alan Redpath, Stephen Olford, D. Martyn Lloyd-Jones & J. Sidlow Baxter. David’s life and ministry have been profoundly influenced by the lives of George Muller & J. Hudson Taylor. David presently works with FRIENDS Peterborough offering help, hope and a "hand up" to those who drop in off the street.

Add Our Feed to Your Homepage: